Phase inversion temperature – How to choose an emulsifier?

The systematic study of the phase behavior of tertiary mixtures made up of oil (O), water (W) and surfactant (S) has, in the last few years, provided a more complete understanding of the colloid phenomena bestowed on surfactants. Some important aspects of emulsiology – namely the stability of emulsions and the choice of emulsifiers – are now better understood.

Tertiary systems W/S/O are very sensitive to variations in temperature because surfactants lose their affinity for water with an increase in temperature, become insoluble in the aqueous phase and tend to become dispersed into the oil phase. This change of the hydrophile lipophile properties of the surfactant due to effects of temperature occurs in a gradual and continuous way. It becomes clearly visible over the temperature interval in which the affinity of the emulsifier for the water becomes balanced by its affinity for the oil. A phase inversion takes place over this temperature interval. The emulsion which at lower temperatures is an oil in water type becomes a water in oil type when this particular temperature is exceeded.

The phase inversion temperature (PIT) can be considered as a typical parameter of the W/S/O tertiary system and because it is influenced both by the type of surfactant and by the type of oil phase used it proves to be useful for interpreting the behavior of emulsions. Phase inversion can be produced by modifying some physical variables or the composition of a W/O/S system. Normally the parameters that influence the transition from W/O to O/W in a W/Nonionic S/O are an increase in salinity, the molecular weight of the hydrophobic part, the branched structure of the hydrophobic portion, the decrease in temperature, the atomic number of carbons in the hydrocarbon oil, the EO number, the polarity and the HLB value of the surfactant or, also, adding a long chain alcohol. 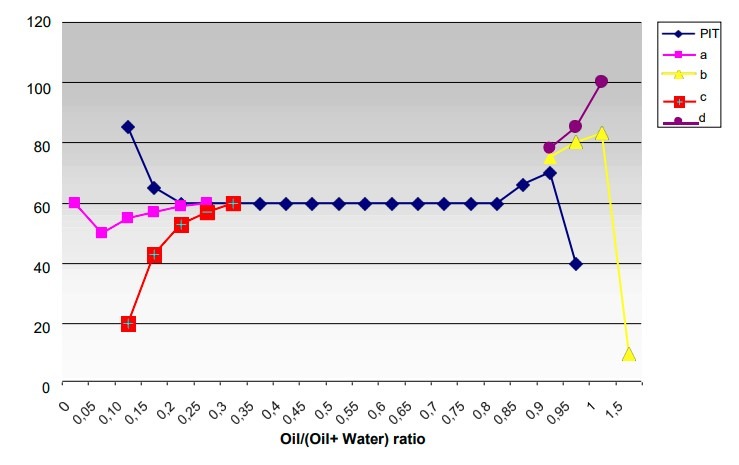 The path of a typical phase inversion temperature curve varying with the water/oil fraction is illustrated in the graph foregoing.

The system used is water/cyclohexane/nonylphenol 9.6 EO and the concentration of the surfactant is equal to 5%. At temperatures below the PIT curve the emulsifier shows hydrophile characteristics and the dispersions that form are the oil in water type. On increasing the temperature, the emulsifier loses its solubility in water and becomes more lipophilic. Due to this increase in affinity for the oil there is a phase inversion and above the PIT the oil constitutes the external phase. Over a wide range of water/oil ratios it is the emulsifier, which on the basis of its preferential affinity one of the two phases, determines which will be the external phase. At the extremes a large excess of one of the two components (the water on the left and the oil on the right) produces a barrier to inversion.

The predominant component being unable to disperse continues to act as the dispersing part, even if the other factors, not least the HLB value, would favor inversion. In this case the temperature has little effect on the phase inversion. The effect of increasing the temperature in a solution of nonionic surfactant is equivalent to shortening the ethylene oxide chain.

For example, an ethoxylated alcohol which has an ethylene oxide percentage equal to 50% possesses a HLB value=10 (as described before, the HLB of a non ionic emulsifier is empirically calculated by dividing by 5 the percentage of the whole surfactant which is hydrophilic and therefore 50/5=10). This type of surfactant shows an affinity for water comparable to that for oil, therefore, it can be stated that its hydrophilic properties balance its lipophilic ones. Shortening the oxyethylene chain or lengthening the hydrophobic part produces a loss of balance of the ratio of the two portions of the surfactant with a consequent increase in affinity for the oil phase and a reduction of the HLB number.

If on the other hand the ethylene oxide chain is lengthened or the length of the hydrophobic part shortened, the resulting molecule has better hydrophilic properties and its HLB number increases. In a water/oil/surfactant system an increase in temperature produces a decrease in solubility of the surfactant in water. This is due to weakening of the forces of interaction between the water molecules and the ethylene oxide groups present in the hydrophilic portion of the surfactant. The consequence is a progressive change of the 1 hydrophile – lipophile properties which produces an increasing affinity for the oil. In other words, the increase in temperature is equivalent to a reduction in the HLB number. In fact, an emulsifier with HLB=10 shows a balance, at room temperature, of the hydrophilic and lipophilic properties. This is proven by the fact that for W/O/S systems with homologous surfactant, those with an HLB number greater than 10 produce O/W emulsions, while those with HLB lower than 10 tend towards W/O emulsions. Any emulsifier shows a hydrophile – lipophile balance at the phase inversion temperature (PIT) so that at lower temperatures O/W are formed and at higher temperatures than the PIT W/O emulsions form. An emulsifier that is hydrophilic (HLB>10) at room temperature therefore balances its hydrophilic-lipophilic properties when the temperature is changed to coincide with the PIT. In this case it behaves like an emulsifier of HLB=10 would at room temperature.

The arrangement of the surfactant into lamellar structures show that there is no preference for either of the two phases and both the oil and water find a position in the lamellar spaces. An increase in temperature above the PIT value produces an increase in affinity for the oil that will tend to wedge itself in the hydrophobic intermolecular spaces producing the formation of reversed micelles with an elongated or circular form which exposes the lipophilic part of the surfactant molecule towards the outside. The formation of elongated micelles enables a greater solubilization. In fact in the preceding graph, it can be seen that the solubilization areas, that is the zones embraced by the O/W clear point and the cloud point curves for the O/W part and by the W/O clear point and haze point curves for the W/O part, tend to come near to the PIT curve from top and bottom respectively and that there is maximum solubilized content in the vicinity of the PIT.