In this work we have assessed the processing time and consumption of the thermal and mechanical energy of three different production processes. It clearly emerged that, from an energy saving point of view the cold-cold production system is the absolute best. It is a very fast process that only requires mechanical energy. It is a system which has limitations however, because it is very tied to the physical nature of the components of the formulation.

The results of the experiments are shown in the graph at the side.

The right mechanical and thermal energy saving involving the improvement of the processing conditions and the quality of the working environment must be sought by assessing the components of a new formulation, not only based on their cosmetic functions, but also on the physical form and behavior in emulsion and by studying the most suitable production method for each formulation. 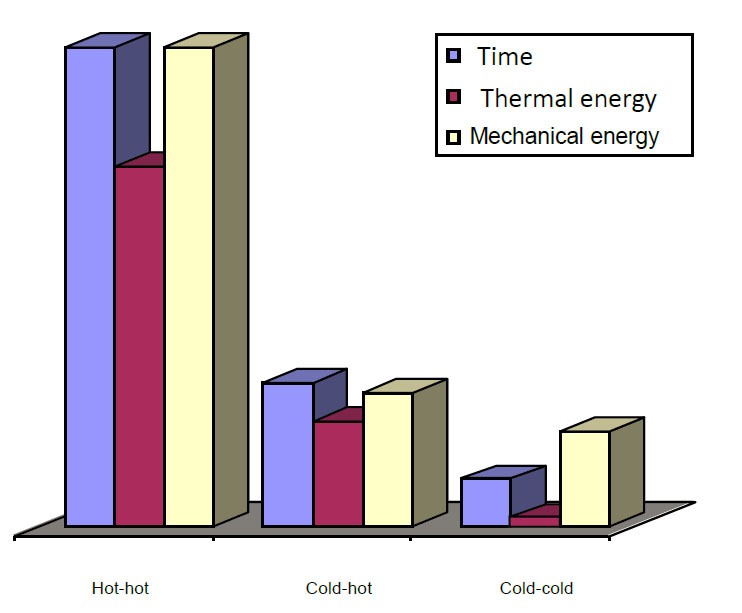 In this respect, we think it is useful to examine the behavior of the same emulsion, produced both with the conventional hot-hot method (A), and with the hot-hot-cold (B) method. In the graph on the following page curves A and B represent the performance of the viscosity of the emulsions, while curves A1 and B1 represent the thermal (heating + cooling) and mechanical energy consumption performance during production. 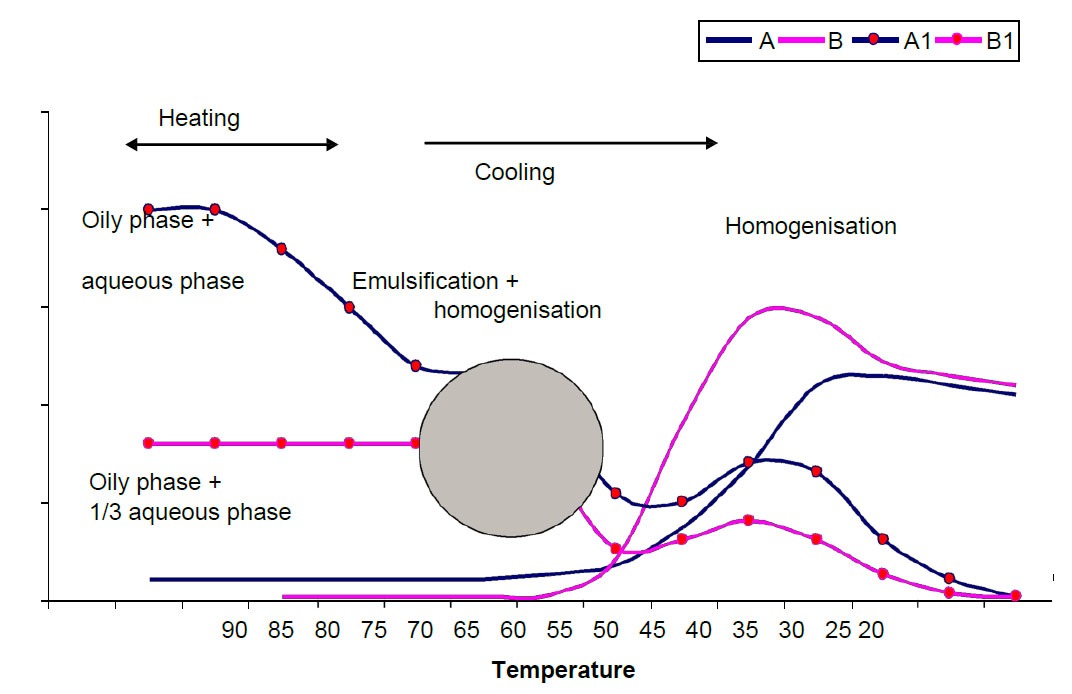 The emulsion (B) produced with the hot-hot/cold method (oily phase at 80°C + part of the aqueous phase heated to 70°C. + the remaining cold quantity), requires less energy consumption compared to the emulsion (A) produced with the conventional hot-hot method. The biggest saving occurs in the initial phase where the oily phase is melted and only 30% of the aqueous phase is heated.

After the emulsification/homogenization phase, less thermal energy is required for cooling because the cold part of the aqueous phase contributes to lowering the temperature of the emulsion. The reduction of the cooling time greatly shortens the formation time of the emulsion thus increasing daily productivity. Limiting heating to the oily phase and to part of the aqueous phase, in addition to saving energy, avoids overheating equipment, often the cause of accidents and problems with the quality of the working environment.

The OLEAMULS® OW emulsifying system has been demonstrated to be particularly suitable for low temperature processing in which there is less expansion and contraction of the phases; consequently, the emulsifier firmly retained the water/oil interface and forms a particularly ‘elastic’ and resistant film that guarantees greater stability for the emulsion.