The energy required for heating and mixing largely depends on the arrangement of the stirring unit, central or planetary, the presence of counter-rotating blades or a scraper shovel. Generally, in the cosmetic sector, a turbo-emulsifier under vacuum is used fitted with a central stirrer with counter-rotating blades and a homogenizing turbine placed on the bottom.

It is a method that can be applied in the same way to OW and WO systems; the energy is used to bring the two phases to about 80°C separately, to perform emulsification and cool the finished product after processing.
A high-temperature production method causes the heating of the production department and the formation of vapors or odors; the exchange of air necessary to ensure suitable environmental conditions for production, considerably affects the energy costs of air conditioning.

To cut processing costs, you can also intervene in the formulation of the product by trying to use ingredients that allow you to keep the viscosity of the emulsion low so that not much mechanical energy is required for mixing and an emulsifier system that does not migrate between phases, but remains firmly positioned at the water/oil interface, forming an elastic and resistant film that facilitates the formation of the emulsion.

In this respect, we have examined the different use of energy required by the same emulsion made with different emulsifying systems. 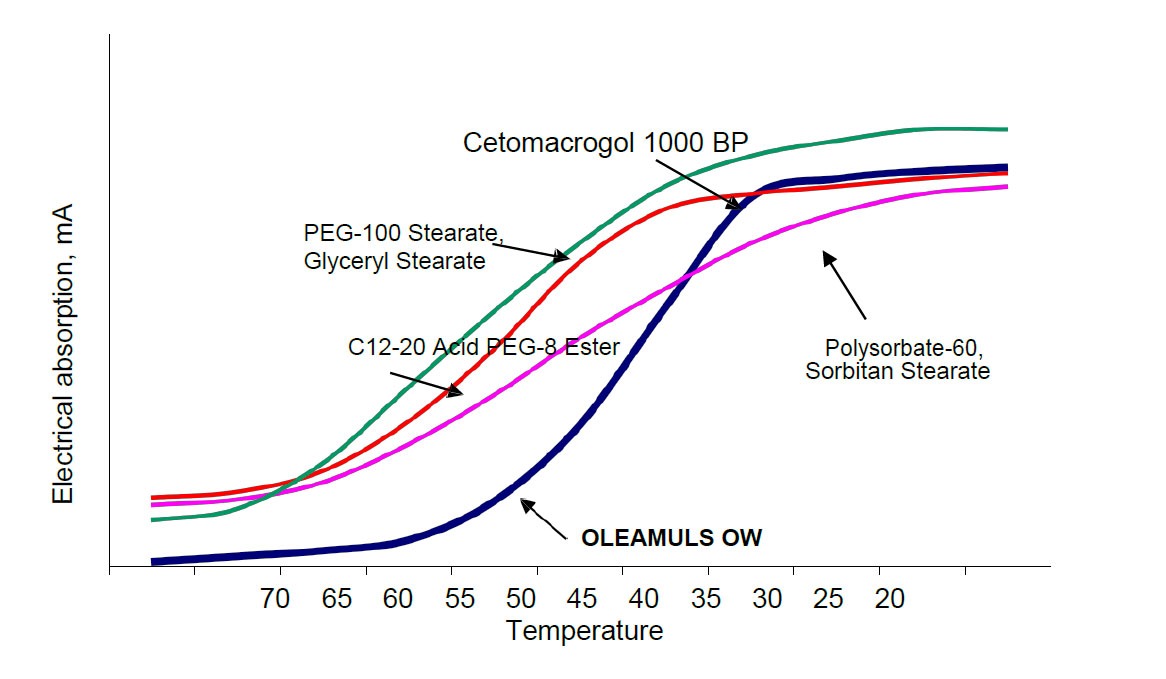 It is interesting to reflect on the OLEAMULS® OW (INCI = Polyglyceryl-4 Stearate, Potassium Olivate), an OW emulsifying system produced by SOCRI – Greengredients®. The post-micellar organization that assumes the molecules of this product in water is typical of a structure with liquid crystals in which the bistratified micelles tend to create a configuration with multiple lamellar layers. In this configuration, the gelled lamellar phases of liquid crystals are added to the structured interfacial film contributing to increasing the stability of the system. When they are present in the oil/water interface, liquid crystals thus act as emulsion stabilizers giving rigidity to the system and limiting the fluctuations of the interphase components. In such a structure, the presence of solid bodies with a stabilizing function can be reduced, thereby lowering energy demand.

The ease of ‘diffusion’, of being quickly arranged on the interfaces with the polar head immersed in the aqueous phase and non-polar end inserted in the oily phase, highlighted by the comparison of the absorption of the mixer motor during production of the four emulsions produced with different emulsifying systems, make use of the OLEAMULS® OW particularly indicated when carrying out this experiment.

In fact, at the start of processing, the emulsion produced with the OLEAMULS® OW, demonstrated lower mechanical energy consumption, which remains decidedly less than the others for most of the production process. The emulsions only have a similar energy demand in the final cooling phase. In a production process with the traditional hot-hot system, to save time and energy it is basically necessary to work on the following points:

1. Perform the processing under vacuum. In these conditions, in addition to improving the product’s organoleptic characteristics, the presence of trapped air is avoided, which has an insulating effect and slows the cooling the emulsion.

2. Have an efficient mixing system. Use a stirring unit fitted with a scraper to promote the heat exchange of the product with the inner surface of the mixer.

3. Use a suitable emulsifying system.