The results obtained are reported in tables and charts containing the measurements of cell viability (MTT assay) and anti-inflammatory activity after treatment with the product to be tested, AVOMULS® LOW with respect to control (untreated cells) in HaCaT cell line. The reported values represent the mean ± SD of at least two independent experiments conducted in duplicate.
Statistical analysis was performed with Student t-test method. * p values ≤ 0.05 and ** p values ≤ 0.01 were considered to be statistically significant when compared with control (untreated cells).

HaCaT cells were treated (24 h) with different concentrations of the tested product in order to identify the concentrations which do not cause a decrease in cell respiration (index of cell viability) exceeding 20%.
In Figure 2. and Table 2. the graph and corresponding data of cell viability, expressed as a percentage respect to the control (Ctrl, untreated cells) are shown. 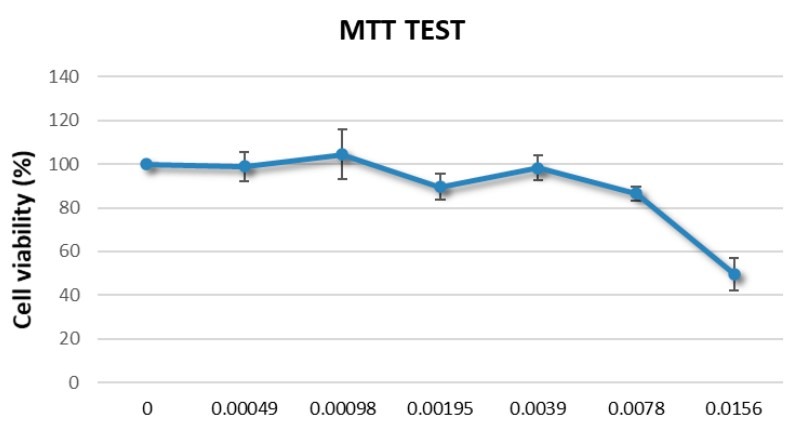 Figure 2. Effect of 24 h treatment with the tested product on cell viability (MTT test).
Values are expressed as a percentage referred to untreated control cells. Data are represented as mean ± SD (n=2; replicates=3).

It is possible to note that the product shows a slight cytotoxic activity only at the highest tested concentration (0.0156%), with a viability equal to 49.59%. For this reason, the two highest concentrations that do not cause a cell mortality more than 20% are 0.0078 e 0.0039%. For subsequent test these two are chosen.

The possible anti-inflammatory activity of the tested product AVOMULS© LOW after stimulation with TNF-α was evaluated in HaCaT cells, measuring the expression of IL-8 by an ELISA kit.
In Figure 3. and in Table 3. the graphs and data of the positive control (Ctrl +) stimulated with TNF-α compared to the untreated and non-stimulated cells (Ctrl) are shown. 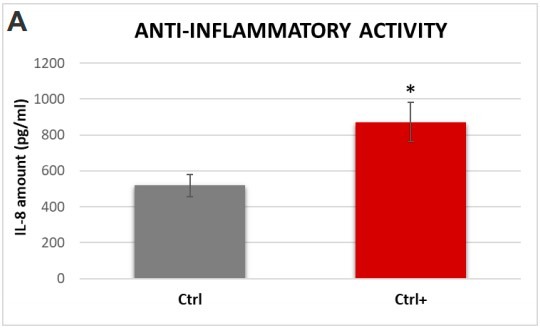 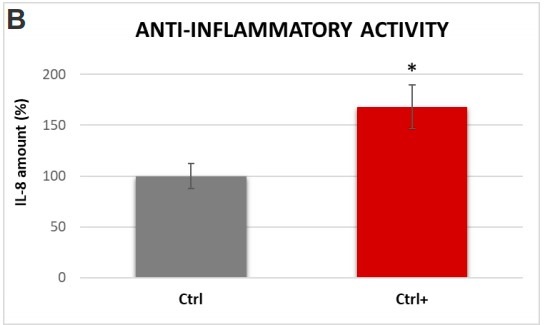 IL-8 levels in HaCaT cells treated with TNF-α (Ctrl +) are significantly higher compared to untreated cells (Ctrl) with an increase of 68,05%, indicating that the TNF-α is an excellent pro-inflammatory stimulus for this cell line. Figure 4. shows IL-8 levels expressed as concentration in pg/ml (A) and percentage (B) in HaCaT cells treated with the tested product at the concentrations of 0.0039% and 0.0078% compared to positive control (Ctrl+, cells treated only with TNF-α) while Table 4. reports the corresponding data. Values are reported as average (± standard deviation, SD) of the concentrations derived from samples absorbance values, interpolating them with the standard curve according to the manufacturer instructions.

The reported data highlighted that the treatment with AVOMULS© LOW induces a decrease in interleukin-8 production, resulted to be highly significant for both the tested concentrations. In particular, there is a dose dependent reduction of about 26% and 63% after treatment with 0.0039% and 0.0078%, respectively, indicating an interesting in vitro anti-inflammatory activity of the product.