The emulsions prepared during this experiment all have an attractive shiny appearance, a typical characteristic of inverse phase emulsions. They have a decidedly original feel and, to the contrary, of WO systems, are quickly absorbed and leave the skin feeling pleasantly fresh, even when they contain a large fatty phase. These properties persuaded us to verify, using a conductometer, which was the exact finished phase of the emulsion, and study the behavior of the continuous phase of the emulsion at different temperatures. We examined six formulations based on the GH-6 emulsification system prepared both with the LEE system and with the hot classical method.

The test of conductivity is made at the end of the emulsifying phase, and then repeated at regular intervals until the emulsion has reached room temperature. In the emulsions prepared with the LEE method (A-4), after a slight and progressive decrease in conductivity, the curves jump before stabilizing between 250 and 400 S/cm, values that are lower than those of a normal O/W system. Those values are located in an intermediate position between the path of the curve of conductivity of the water phase (Aqua + Diglycerin) and the average of the oil phase of the various emulsions. 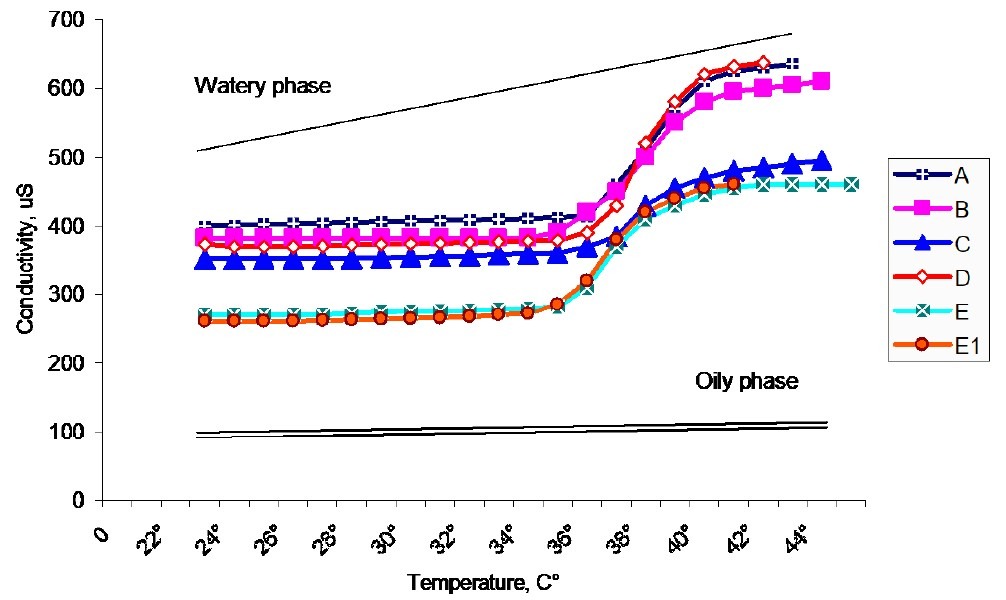 It is interesting to note that the polarity of the oil phase influences the path of the conductivity curve, which, contrarily, does not seem to be affected by the relationship existing between the phases. The shininess and the homogeneity that characterize the emulsions prepared with the LEE system could be related to their minor conductivity.

The conductivity curve acts very differently in emulsions prepared with the classic method. 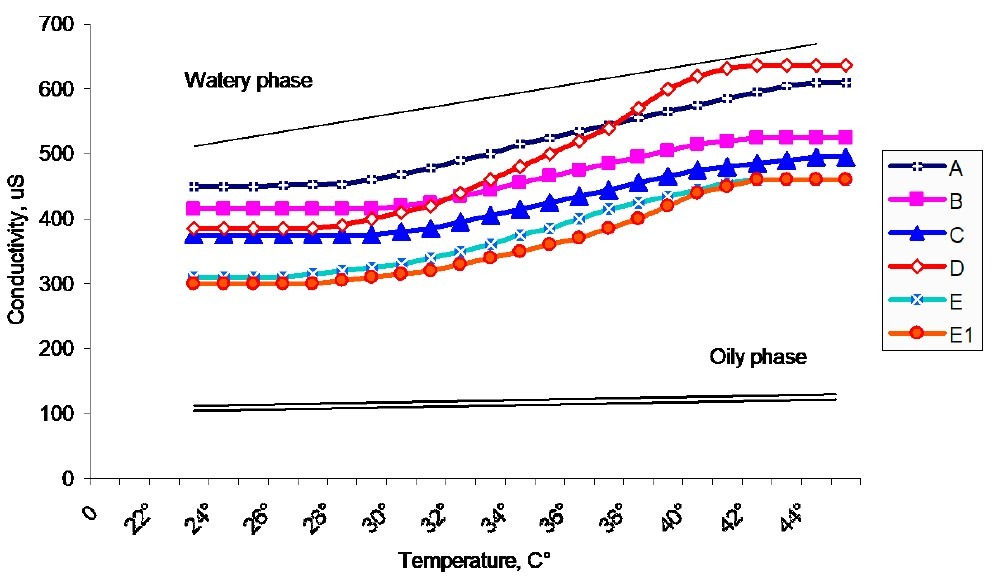 The various curves, starting with emulsifying phase, show a gradual but continuous decrease in conductivity that continues until room temperature is reached. The values of conductibility recorded at the end of cooling are typical of a water external phase. Above their different rheological behavior and their different electric conductivity, the emulsions prepared through cold processing showed another particular characteristic.

The lamellar structure found inside the emulsion, promotes self-structural correction after physical solicitation. For example, the almost mirror like surface of a cream, when broken during use, will return to its original form after a short time. A semi fluid emulsion will self-level after being inclined.

When submitted to progressive and gradual heating, starting at room temperature and arriving at 45°C, the various emulsions showed a similar behavior to that shown during cooling, completely reversible. Once stabilized, the stability of the various emulsions tested were once more verified with positive results in both heat and centrifuge tests.