A systematic study to verifying the rheological behavior of O/W emulsions formed by an interesting natural emulsifier (INCI=Polyglyceryl-3 Cetyl Ether, Sesame Oil, Malic Acid) and inner phases constituted by polar, medium polar and non-polar oils (eg. Caprylic/Capric Triglyceride, Dicaprylyl Ether, C12-15 Alkyl Benzoate, Cetearyl Isononanoate and some vegetable oils) was carried out. The tests carried out revealed the predisposition of this new emulsifier – studied and produced by Greengredients – to create stable and high cosmetic value OW systems, containing polar and medium polar oils and esters, which are currently themost in demand and used in the cosmetics industry. With these ingredients, SESAMULS® OW proved it could form stable and pleasant emulsions right from 3%, while the emulsifier percentage has to be increasedin the presence of non-polar substances (eg. Octyl Dodecanol, Hydrogenated Poly-1 Decene, Iso-propylMyristate, Paraffinum Liquidum etc.). Emulsions rheology was assessed using a rotational viscometer (Viscotester VT 02 HAAKE).

The chart below shows the emulsion viscosity trend upon variation of the concentration of the oily phase keeping the emulsifier concentration constant (5% and 7.5%). The unusual curve trend should be observed; the emulsion viscosity, which tends to drop before rising again after reaching the maximum point, increases as the inner oily phase increases. This sinusoidal trend enables obtaining emulsions with different viscosity values by simply varying the percentage of the oily phase of SESAMULS® OW; as a matter of fact, the two curves seem to compensate each other offering the cosmetologist the possibility to ‘play’ with these two behaviors to obtain a product with a given viscosity.

Fig. 1. Emulsion viscosity trend with SESAMULS® OW at 5.0 and 7.5% with increasing concentrations of a medium polar oily phase

The chart below (Fig. 2) shows the viscosity trend of an emulsion in which the oily phase percentage is kept constant and only the emulsifier percentage varies. The curve trend shows how viscosity increases considerably upon increasing SESAMULS® OW from 4% to 5%.

Furthermore, viscosity tends to drop constantly upon further increase of the emulsifier percentage. This shows that SESAMULS® OW can be recommended to obtain fluid, consistent or very consistent emulsions without affecting the stability of the system.

Fig. 2 Viscosity trend of SESAMULS® OW mixtures at increasing concentrations (2.5 – 7.5%) with14% of a medium polar oilyphase. 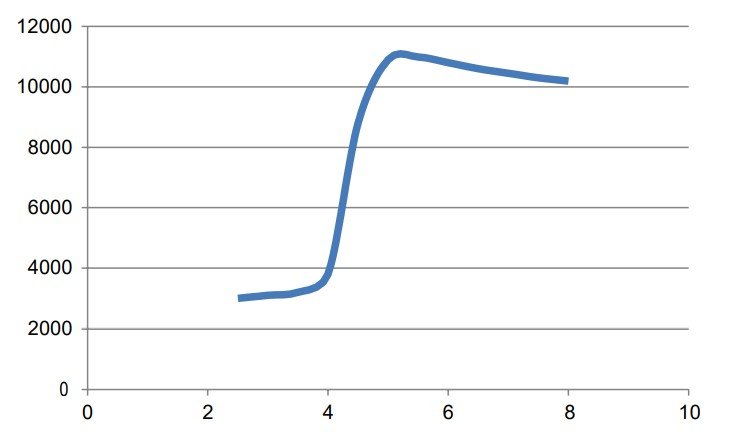