Cell culture The keratinocytes used in the assay were a human cell line (HaCaT, BS code CL 168), provided by I.Z.L.E.R. (Istituto Zooprofilattico della Lombardia e Emilia Romagna) (Figure 4.1.).
The cell line was grown in complete culture medium (Table 4.1.) in condition of complete sterility and maintained in incubation at 37 °C with an atmosphere of 5% carbon dioxide (CO2). 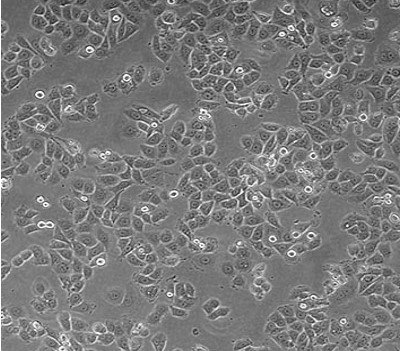 The product EPSAN® C was dissolved at the concentration of 3% in cell culture medium with 10% of fetal bovine serum (FBS).

For the direct relationship between respiration and viability, MTT is considered a good assay to evaluate cell viability (Mosman, 1983). For the preparation of the assay, cells were homogeneously seeded in 96-well plates and incubated at 37 °C, with 5% CO2 humidified atmosphere. After 24 h, cells were treated with the tested product with 8 scalar dilutions ranging from 0.023% to 3%. Cells treated with a known irritating surfactant (SLS) were used as positive control (in concentration from 0.0039% to 0.5%). Untreated cells were used as negative control. The product and positive control were dissolved and diluted in medium.

The test was carried out in 3 replicates for each dilution. After 24 h of treatment, cells were examined under a phase-contrast microscope to record chenges in morphology, possibly due to cytotoxic effects of the tested product. Then the culture medium was removed and the cells were incubated with the MTT solution (1 mg/ml) at 37 °C for 2 h. Subsequently the solution was removed, replaced with 100 µl of isopropanol and the absorbance was read at a
570 nm wavelength using a microplate reader. Cell survival was calculated measuring the difference in optical density of the tested product with respect to the negative control (untreated cells) (Van Meerloo et al., 2011).

Quality check of the assay and expression of results

Reduction of cell viability by more than 30% is considered a cytotoxic effect.

In that case, it is possible to calculate the IC50 value, which indicates the concentration of test product which inhibits the cell viability of 50%.