The aim of the test is to evaluate the anti-inflammatory potential of the tested product AVOMULS® LOW through the measurement of IL-8 levels after stimulation of human keratinocytes with an inflammatory stimulus.Preliminary experiments (MTT test) to identify the non-cytotoxic concentrations were also performed

The keratinocytes used in the assay were a human cell line (HaCaT, BS code CL 168), provided by I.Z.L.E.R. (Istituto Zooprofilattico della Lombardia e Emilia Romagna) (Figure 4.1.).
The cell line was grown in complete culture medium (Table 4.1.) in condition of complete sterility and maintained in incubation at 37 °C with an atmosphere of 5% carbon dioxide (CO2). 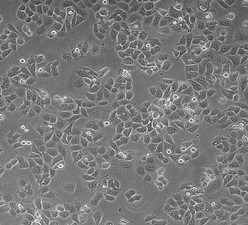 AVOMULS® LOW was dissolved at the concentration of 0.0156% in cell culture medium with 0.5% of fetal bovine serum (FBS). Higher concentrations were previously tested starting from 1%, but they were all cytotoxic.

MTT test is a colorimetric cytotoxicity assay used to test cell proliferation and viability based on mitochondrial efficiency. MTT (3-(4,5-dimethylthiazol-2-yl)-2,5-diphenyl tetrazolium bromide) is a tetrazolium salt that, in case of viable cells, is reduced by the action of mitochondrial dehydrogenase. MTT reduction leads to the formation of formazan crystals, insoluble in the culture medium but soluble in isopropanol, which gives the typical purple colour to the mitochondria of viable cells. In contrast, in suffering or dead cells, lacking active mitochondria, MTT will not be reduced resulting in a less intense purple colour. For the direct relationship between respiration and viability, MTT is considered a good assay to evaluate cell viability (Mosman, 1983).

For the preparation of the assay, cells were homogeneously seeded in 96-well plate and incubated at 37 °C, with 5% CO2 humidified atmosphere. After 24 h, cells were treated with the tested product, starting from 0.0156% prepared directly in culture medium with 0.5% of FBS and following serial dilution (1:2) (range tested 0.00049 – 0.0156%). Untreated cells were used as control. The test was carried out in 3 replicates for each dilution.

After 24 h of treatment, cells were examined under a phase-contrast microscope to record changes in morphology, possibly due to cytotoxic effects of the tested product. Then the culture medium was removed and cells were incubated with the MTT solution (1 mg/ml) at 37 °C for 2 h. Subsequently the solution was removed, replaced with 100 µl of isopropanol and the absorbance was read at 570 nm wavelength using a microplate reader. Cell survival was calculated measuring the difference in optical density of the tested product with respect to control (untreated cells) (Van Meerloo et al.,2011).

For anti-inflammatory assay the highest concentrations of the product that do not cause a mortality more than 20% have been selected.

The expression of IL-8 interleukin after treatment with the tested product was evaluated in HaCaT cells, using an ELISA kit (Invitrogen, Thermo Fisher).
To perform the test, cells were seeded in a 96-well plate and treated with the product at the concentrations determined by MTT test at 0,5% FBS; cells were stimulated with TNF-α during the last 6 h of treatment.

At the end of the treatment, supernatants were collected and used for coating on a specifically pretreated 96-well ELISA plate provided by the kit. The standards were reconstituted with ultrapure water and used to build the standard curve (0-1000 pg/ml). Samples were added to each well in duplicate and the assay was performed according the manifacturer’s instructions. The absorbance was then read at 450 nm using a microplate reader.